Greenbush, Minnesota – (January 25, 2017) Wahl Bros. Racing competed in the 54th Annual AMSOIL Eagle River World Championship Derby last weekend. Despite above freezing temperatures and rainfall, the track remained race-able and the show went on. Drivers Dustin and Jordan Wahl both timed in on the half-mile Thursday night, their times qualifying them for the TLR Cup Tour heats and Sweet 16 final that would take place the next night. Each driver completed three laps for total time: Jordan was sixth fastest with 36.108 seconds, while Dustin rounded out the top ten at 37.102 seconds.

To earn a spot in the ten-man Sweet 16 race, both drivers were charged with the task of finishing in the top five in their heat race. Jordan was first off the line and was in the third position when the checkered flag waved, with Dustin assuming the final transfer spot. With only one race before the 16-lap final, fine-tuning the setup for the soft and wet track was a challenge faced by all. Nearly midway through the final, Jordan came off his sled and would retire from the race that served as third round of the TLR Cup Tour. Dustin raced his way to sixth, leaving him as the #7 in TLR points, while Jordan is just shy of the top 10.

With no practice on Saturday morning, the seven-lap qualifying heats essentially served as practice on the ever-changing track. Dustin went out in the first heat and it was easy to see how bumpy the race surface had become. Going into corner three, a rut forced him off his sled and into the bales. The result was a concussion that had him sitting out the rest of the weekend; and this coming weekend at the Wausau 525 Snowmobile Championship as well.

Jordan was in the following heat and having had the opportunity to watch the one prior, found a fast line that allowed him to lead the race from start to finish and transfer to the semi-finals. During lap six of the ten-lap semi-final, Jordan ran a tight line to sneak underneath the sled running in third and finish there – earning a spot in the front row of the World Championship. The format for Sunday’s World Championshiprace had drivers complete 10 laps, followed by a 10 minute break and then 20 more laps. At the end of the first 10, the #747 was in the eighth position. Once again, he found a fast line that led him to gain several positions in the second half of the race, which ran from green checkered; one of the first times such has occurred in recent Derby history. At the end of lap 30, Jordan crossed the line in sixth. With the W.C. behind them,

Wahl Bros. Racing is preparing for three in a row, beginning with the Wausau 525 this weekend, followed by a stop in Alexandria, Minn. and a trip north to Valcourt, Quebec. You can catch all the action live, for free, on Ditch Banger TV. 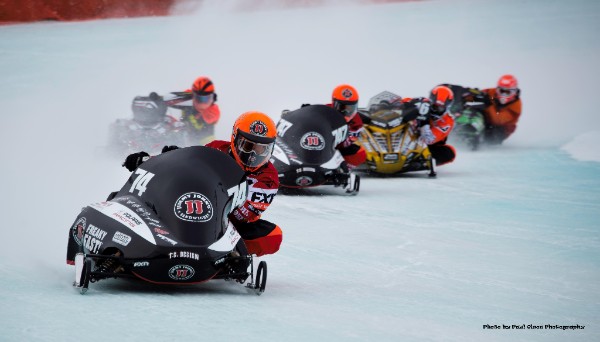